Currently out of stock

The LG K61 Grey is currently out of stock and therefore not available in combination with a contract.

Currently out of stock

We're currently unable to stock the LG K61 Grey. Our customer service department doesn't know when this product will be in stock again. We recommend choosing a different product.

Everything about the LG K61 Grey

Average scores of the LG K61:

Description of the LG K61

LG's K-series devices were presented at the beginning of 2020 and they promise high performance for little money. LG is taking on the battle in a market with fierce competition. The flagship of the series is this LG K61.

The phone has a quad-camera system on the back, which you will not often see on a phone in this price category. Besides that, the K61 has a 6.5-inch screen, a good battery, and a fast processor, in short: a lot of value for your money!

Five cameras for all the details The LG K61 has a quad-camera system on the back. A primary 48-megapixel sensor, an 8-megapixel wide-angle lens, a 2-megapixel macro lens and a 5-megapixel depth sensor. So you have the right lens for every situation! The screen has a 16-megapixel front camera for taking selfies.

Cinema in your pocket The 6.5-inch screen of the LG K61 has an FHD+ resolution and an aspect ratio of 20:9. The narrow screen eliminates the black bars normally seen in movies and series. This way you only enjoy your content and the entire screen is used optimally!

Performance and battery life The processor in the K61 is powerful enough for almost all apps and games. Just don't expect the same performance as a device that is 4 times as expensive. The battery in the device can easily last an entire day. Unfortunately, the K61 does not charge quickly, so it can take a while before you can step away from the power outlet.

Dualsim and headphone jack Two SIM cards fit in the phone, which is very useful when you are on holiday and want to use a foreign bundle or phone number. It is also possible to connect your old headphones via the 3.5mm jack.

With normal use, we guarantee that your phone will work properly throughout the full warranty period. If something goes wrong, Gomibo.no and LG will make sure to help you out!

How do repairs at LG work?

Accessories for the LG K61 Grey

Show all accessories for the LG K61 Grey

Accessories that go with the LG K61 Grey

Show all accessories for the LG K61 Grey

Colour options for the LG K61 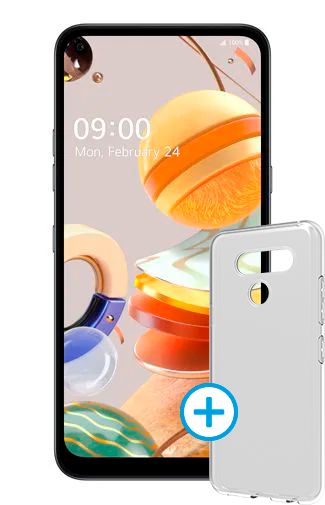