In stock: delivery in 1-4 business days

Everything about the Samsung Galaxy S10 128GB G973 Black

At the start of 2019, Samsung revealed the new Galaxy S-family with its many improvements. The South-Korean manufacturer has given this tenth line their all! The Infinity Display takes up even more of the front, the display has a so-called punch-hole for the front camera, and the back of the device comes equipped with no less than three cameras!

The S10 has also been updated under its beautiful black casing. The Exynos 9820 chipset offers a lot of computing power, so no task is too heavy! On top of that, this flagship phone comes equipped with a large battery that you can charge wirelessly and an ultrasonic fingerprint scanner that's even faster and more reliable!

Ultrasonic fingerprint scanner under the display

The introduction of the new Galaxy line goes hand-in-hand with a new way of unlocking. The S10 comes fitted with an ultrasonic fingerprint scanner under the display. This sensor makes a 3D scan of your finger, so you can unlock your phone even faster and more securely!

Pin-sharp display with a lot of contrast

The Infinity Display is 6.1 inch and consists of a Dynamic AMOLED panel that's well-known for its perfect colour contrast and crystal-clear images. Bright colours splash off the screen, and black looks truly black! Whether its playing some PUBG or watching a Netflix series, everything will look good on this display!

Ultra thin bezels and a punch-hole

The Infinity Display is surrounded by even thinner bezels than its predecessors. The top of the display features a punch-hole for the front camera. Thanks to this creative solution, the screen takes up even more of the front, which gives it a very premium appearance!

The Galaxy S10 128GB G973 Duos Black comes in a sleek casing made of hardened glass. The sides are slightly rounded, so your smartphone lies comfortably in the palm of your hand! The entire casing has an IP68 rating, which means the S10 is water resistant!

Every camera has its own feature

On the back of the device, you'll find three sensors that all have their own features. The 12-megapixel primary camera features a variable diaphragm that automatically decides how much light to capture when taking pictures. This means you'll have pin-sharp pictures, even in low lighting!

The 16-megapixel camera has a wider angle, so you can capture even more in one picture! The third 12-megapixel camera zooms in without missing a single detail. In the punch-hole on the front of the device, you'll find the 10-megapixel front camera that takes excellent selfies!

In 2019, Samsung gave their software skin a big update. This OneUI skin is programmed on top of the Android 9 Pie operating system. OneUI has fewer pre-installed apps, and the interface makes the S10 very user-friendly!

Samsung has put a lot of time and energy in the Exynos 9820 processor. This chip has even more computing power than its predecessors, so playing heavy 3D games like Fortnite is no problem. On top of that, the S10 has 8GB of RAM that helps your device switch between apps without hitches or glitches!

The 3400mAh battery provides the S10 with power. The energy-efficient display and processor don't use a lot of power, so your device can easily last an entire day on one full charge! You can quickly charge the battery via the cable, or wirelessly by placing your device on a Wireless Charging station!

The user manual is not included but can be downloaded or viewed here: Dutch user manual. You can also download an English version: English user manual.

With normal use, we guarantee that your phone will work properly throughout the full warranty period. If something goes wrong, Gomibo.no and Samsung will make sure to help you out!

How do repairs at Samsung work? 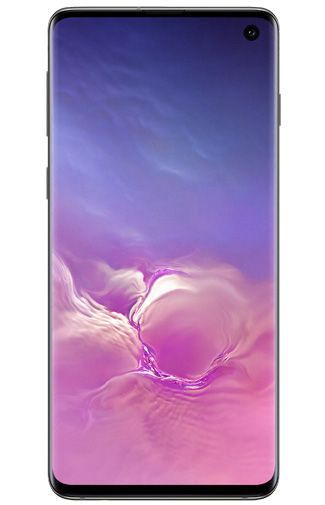