Everything about the Fairphone 3 Black

Experts about the Fairphone 3 Black

Average scores of the Fairphone 3:

Description of the Fairphone 3 Black

The Dutch phone manufacturer Fairphone is releasing the third version of their Fairphone: the Fairphone 3 Dark Translucent. Again, they focussed on sustainability and honesty while producing the phone. The third smartphone from this brand is a major improvement to their last model.

The Fairphone 3 features a 5.65-inch screen, you can take fun pictures with the front and back cameras, and this phone uses Quickcharge. The last feature makes sure that you can charge your phone in no time at all. Also, this smartphone consists of loose parts, so you can take it apart yourself and change parts, exactly what Fairphone stands for.

Fairphone was founded in 2010, and is a Dutch initiative to create the most fair smartphone. The first Fairphone was introduced in 2013, and the second version was released two years later. The Fairphone 3 is now presented in the colour Dark Translucent, a welcome, eco-friendly successor.

Sustainability, transparency, and modularity are three of the focal points of the Dutch company, which can be seen in the Fairphone 3! For example, they take the working conditions of the countries from which they buy the raw materials into account.

The main focus of this black, translucent Fairphone is the durability of the product. Half of the plastic that is used is recycled, and the materials that are used are brought in from conflict-free countries. Above all, the phone is TCO certified, which is a label for durable IT products.

This agrees with the philosophy of the company: a phone will last a lot longer this way, and you won't throw it away as soon as something's broken. You can even replace the camera module or the USB port yourself! The battery is exchangeable as well, and you can see all of these parts through the translucent back cover!

The well-known website iFixit rates every smartphone based on how well it can be repaired. The Fairphone 3 got a score of 10/10, a perfect score. The website gave this high score for being able to repair or replace parts of the device yourself, as well as for the good documentation on how to do this from Fairphone.

Fairphone didn't just enlarge the screen diagonal when compared to the previous model, they also chose a different ratio. The elongated display is great for multitasking, and shows more when you check out websites, for example. The layer of Gorilla Glass 5 has to make sure that the screen doesn't get damaged.

The Dark Translucent Fairphone 3 has a camera on both the front and the rear. You can take fun selfies with the front camera, which has a resolution of 8 megapixels. You can also take nice pictures with the 12-megapixel camera on the rear, or record 4K videos.

The battery of the Fairphone 3 Black has a capacity of 3060mAh. You should be able to use the phone for a full day, without having to charge it. You can quickly charge your phone with Quickcharge.

On the rear, you won't only find the 12MP camera, you'll also find the fingerprint scanner. It's just a matter of scanning your index finger, and your device is unlocked. This way, all your documents are stored safely!

Two SIM cards in one phone

If you want to be available on two numbers at the same time, the black, translucent Fairphoneis a good choice. It offers room for a second SIM card, besides the extra memory card. This is very useful if you want to keep your work and private life separate!

This black Fairphone 3 runs on Android 9.0 Pie, the open operating system from software giant Google. You'll have direct access to Google services like Gmail, Google Drive, and Google Maps. You can also download fun apps and games from the Play Store./p>

Please note: The Fairphone 3 doesn't come with a charger or earphones, which is in line with the company's philosophy. In terms of packaging, environmentally friendly materials have been chosen and a protection case and screwdriver to change parts yourself are included.

User manual for the Fairphone 3 Black

The user manual is not included but can be downloaded or viewed here: Online user manual.

The Fairphone 3 Black does not come with a charger. Check whether you have a compatible charger at home. Or order a charger.

With normal use, we guarantee that your phone will work properly throughout the full warranty period. If something goes wrong, Gomibo.no and Fairphone will make sure to help you out!

How do repairs at Fairphone work?

Tips & Tricks for the Fairphone 3 Black

Buy the Fairphone 3 Black? The options:

Accessories for the Fairphone 3 Black

Accessories that go with the Fairphone 3 Black 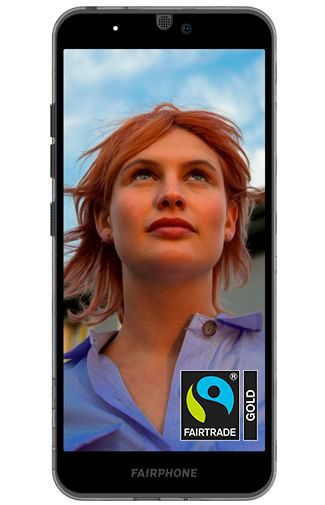